This evening saw the end of the painting for the Beastmen. There was a bit more than I thought there would be and to be honest when I add the photo to here in a bit I am bound to see something I missed! 😂

As promised I have added both factions side by side…

I have thoroughly enjoyed painting both factions. I don’t actually know if I have got a favourite one.

My aim for this lot was to paint in only contrast paint, and to be truthful, I used some AP Dark wash for the black and a dot of blue for a wash on the severed head. The metallics were done in GW standard paint. But that is it – once the white spray was done everything after that (apart from the above) was Contrast. Some white was used to tidy up, but that took it back to the base spray colour.

So what have I learned from this…

First off, I like Contrast paint… I was really pleased with it for the 10 and 15mm minis, but this was the first time doing a full 28mm miniatures and I am chuffed with the results. These are quite textured miniatures, I might dig out my space marine scouts and see what happens to them.

Secondly, the paint on the whole does what it is meant to do, I like some other people, was sceptical. My kids got me some for my birthday. I got a few more, then a few more and a few more still. Since getting a bigger range I haven’t touched the AP paints at all. I think my initial scepticism was unfounded.

To be fair some colours work better than others. Over white, the black looks dark grey, but I reckon putting it over a grey base coat would darken things down a bit, either that or stick to going over it with the AP dark tone.

So like most things there are down sides too…

Price, these things ain’t cheap, and if you add in the ‘special’ spray cans, individual pots of matching undercoat and mixing medium then things get pricey very quickly. If you are like me, you can buy a grey and white auto spray can that costs about £4.00 and go over the top of that with the Contrast paint. I have a pot of Matt medium which, at 500ml will last me a good while.

Pot design – same crap design as usual, tall pot that easily overbalances and pours your expensive paint everywhere. I 3D printed a pot holder and so far I have been lucky when I haven’t used it. Luckily the paint is thin, so the tops are closing properly. However on some of the ones I have used a lot I have noticed a build up of residue.

Stupid bloody names. I have each pot that I own written down, so when I go into the shop as I can’t remember them, let alone spell them. When writing up my blog, if they are in front of me they get named, if they are back in the box then they are brown, blue or red paint. One day they may come up with names like Khaki shit and nipple pink, at least I would remember them.

So in short, even with the failings mentioned above, I do like them. I must, as my new GW standard paint totals about five pots and three of them are metallic!

So moving away from the miniatures for a bit

It made my a bit tearful to be honest. Not sure why. I never met my Grandad on my dad’s side he died ten years before I was born in 1956. He survived a gas attack at 3rd Ypres and after being invalided out of the army he returned to the North East of England and returned to the mines where the coal dust finished off what the gas had started. He was one of the ones that made it home at least. 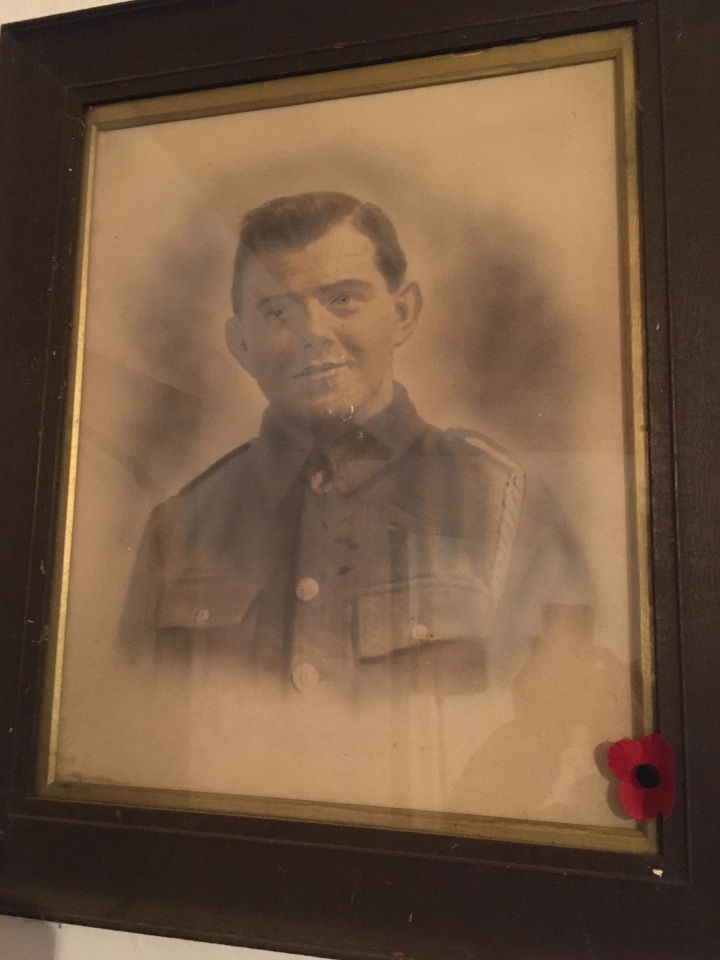 I have been doing Remembrance with my class, and showed them the Reawick war memorial embedded in the cemetery wall. It has the dead split into three groups, lost at sea, killed in action and also died of illness contracted during service. I have never seen this before. The only thing I can think of in this case is that they outnumber the other two causes of loss.

Still one of the best songs out there…

Not to forget this too…

So I eventually got these finished… I have really enjoyed doing them and am pleased with how they look. 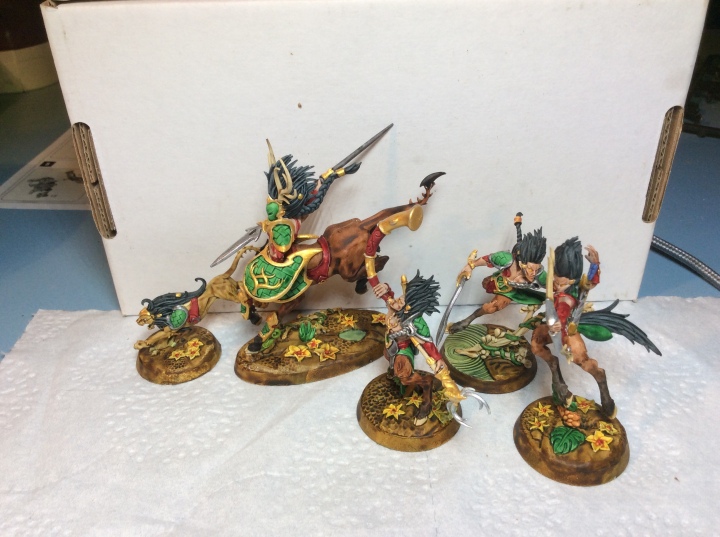 They are, with the exception of the metallics, all done in Contrast paint (apart from Army Painter dark wash on the hair). The contrast paint was added over a cheap white car primer (well £4 a can). One day I might splash out and see what the ‘proper’ undercoat colour looks like, but I doubt it. I would rather spend my money on toys and not undercoat 😉.

I could go over bits and do highlights, but haven’t worked out how with this paint yet.

As these were finished, I made a start on the Beasties…

I got all six built, these went together easier than the Fey. So easy in fact that I had to superglue one of the heads on as I reckon I would have lost the thing eventually.

So once built, I warmed up my spray can in warm water and then gave them a blast. 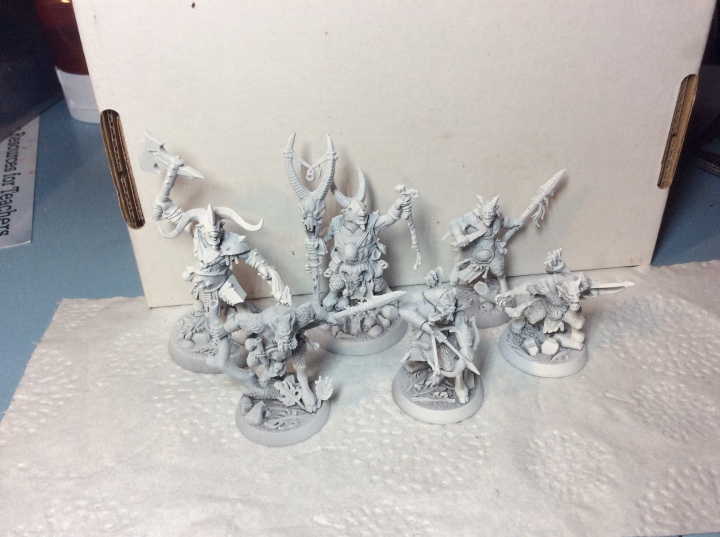 I will have to have a think about the colours, they will be a lot less bright than the fey, I would imagine green and gold would not feature heavily in their wardrobe choice.

Regarding colours, if you had asked me I would have said I had painted these with a very limited palette….

It was this many!

I forgot to show warp lightning, this was used on the gems in the belly of each of them

I also didn’t bother showing the paints I repainted a different colour.

This is not all of the Contrast paints I have, but for the beasties I will probably have to mix some of the colours rather than purchase any more.

I have decided to leave the fey bases as is for the time being as they are beginning to grow on me.

I nearly got these finished tonight, needed to wait for things to dry so I should manage to get them completed tomorrow.

In all honesty, all I really need to do now is to get the centre of the flowers done and the. That is about it, apart from making sure I haven’t missed anything.

I decided on yellow eyes without a pupil. There was a lot of Doreen on each mini, and I wanted something a little bit different. I can’t tell whether it is visible or not in the photo. I used the same colour as the flowers.

I am not sure what to do with the base rim, I will have to decide whether I leave it with the mottled look or whether to paint it black or dark brown.

Tomorrow I will finish these off then get the other set built too.

I did some more work on these tonight… 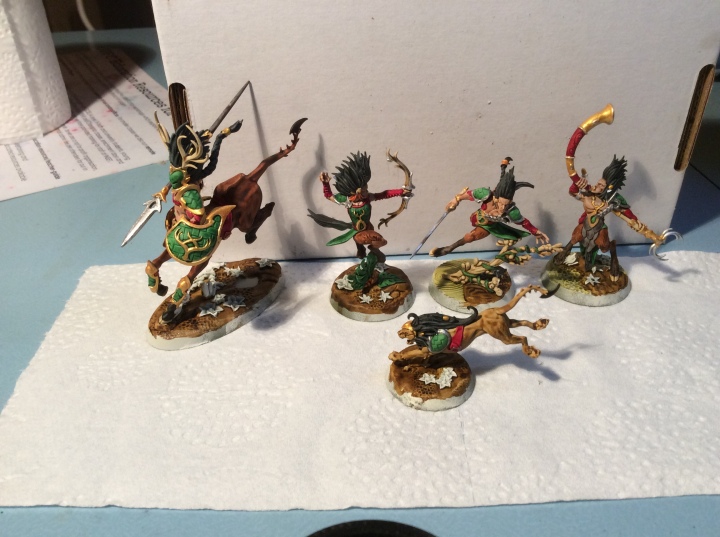 Metalwork is pretty much done, bases started too. I am going to repaint the quiver as I did it silver and it looks totally naff. I also did a couple of the flowers on the bases dark blue and to be honest they don’t look right at all. I will have a go at red or orange and see what they look like then.

One thing I must do is sort out their eyes, I am thinking green, no visible pupils, just greenish eyes that would befit some kind if fey creature. I will have to have a think and see where I get with my perusing. 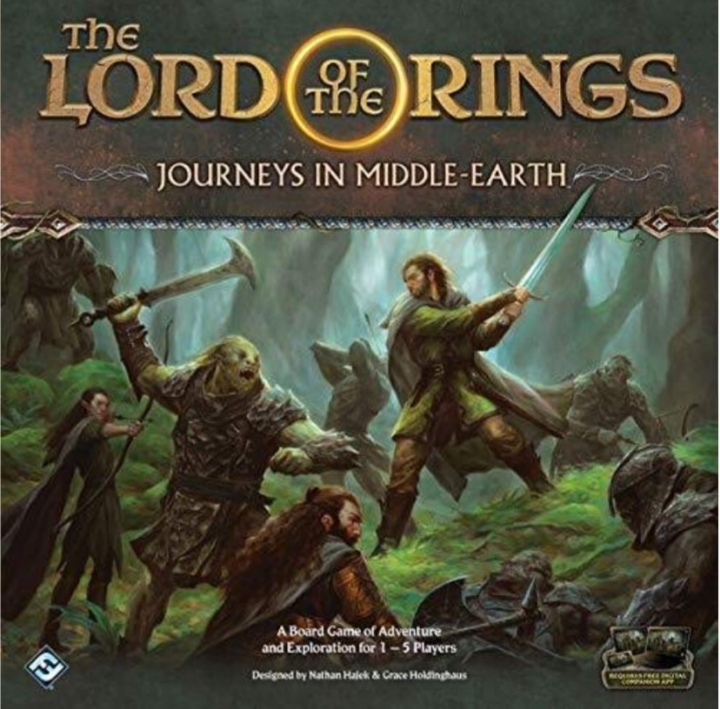 I managed to get it cheap on a Facebook selling group, I have been after it for a while, so here is hoping that I like it. If not the miniatures can be used in my RPG and the adventures likewise.

Back to teaching tomorrow after half term and then a couple of training days.

So tonight I actually got some more done… not huge amounts, but an extra layer of gold on the parts that had a layer already and some bits and bobs on them all.

I also added all of the bits back onto the models. Tomorrow I will get on with the ironwork and silver too.

Apart from the Gold and a dark wash from Army Painter, these have all been done with just Contrast paint. I really liked the paint with the smaller scale stuff, but I am pleasantly surprised with how the 28’s are coming on. Once these are done I will then need to do the beast men.

So after my woeful last post regarding a lack of energy to paint anything, I got a second wind and got the gold paint out…

Gold is really difficult to photograph, I thought I had missed loads only to realise it was a reflection.

Still bucketloads to paint but a teeny bit of progress is progress.

I also returned home to find my new rules a bit wet. I can only blame myself, I left them lying and I left the undrunk cup of tea next to them. Obviously someone bumped something and said tea went splosh!

They are getting the toilet paper drying method…. here is hoping the TP doesn’t stick to the pages!

I decided to push on with these tonight…

Still loads to do but definitely getting there. My biggest problem was that bits that needed painting couldn’t be because of things like the centaur armour and on of the sword arms of another. I decided to get these off…

One side came off fine, but the other snapped off 🤬. On the up side the beastmen don’t seem to have anything similar to get in the way.I moved away totally from the box art, for a Start bright orange hair just doesn’t say fey to me, it always make me think of dwarf slayers. I darkened down the hair with some Army Painter dark wash. I am a lot happier with this than just the Contrast Black yesterday.

Hopefully I will be able to get some more done tomorrow evening as life is more than likely going to get in the way as I have my eldest of to a friends house, I will be off visiting my mate and all sorts of shenanigans like that.